Bracket madness is about the descend on us. Before we get to March Madness we’ll have to suffer through a different kind of madness: the Neoliberal Shill Bracket. This year the Neoliberal project has succumbed to inflation and has expanded the field. This year features a play-in round.

As we get ready to break it down, let me ask you to consider the following questions.

In the Economist Play-in round there are 8 handles matched up. How do these prospective shills stack up? Let’s take a look.

For this article I pulled data from the Twitter API as of about 2pm eastern on February 8, 2020. I pulled the last 1,000 tweets (or all if less than 1,000 existed) and the summary statistics for each of the prospective shills. 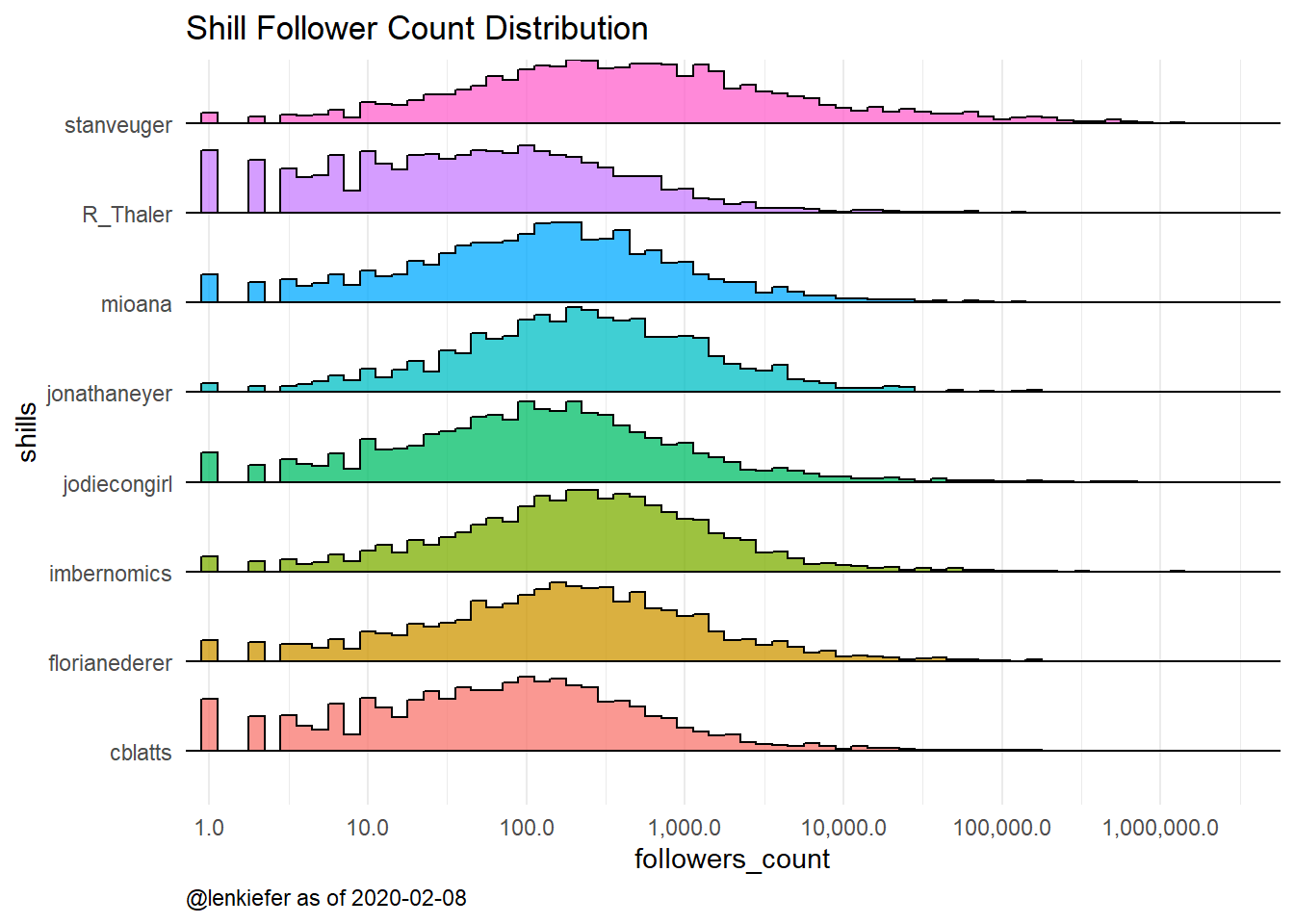 What about timing of tweets? Maybe you are a morning person and want to see the best tweets right when you get up. Or perhaps you are a night owl and what the hottest takes late at night. What about weekdays vs weeknights? Let’s take a look at the timing of tweets by our would be shills.

The chart below shows the share of each shills last 1000 tweets that were made based on day of the week and 3 hour blocks. We see that for the most part our shills are active during the week and business hours. 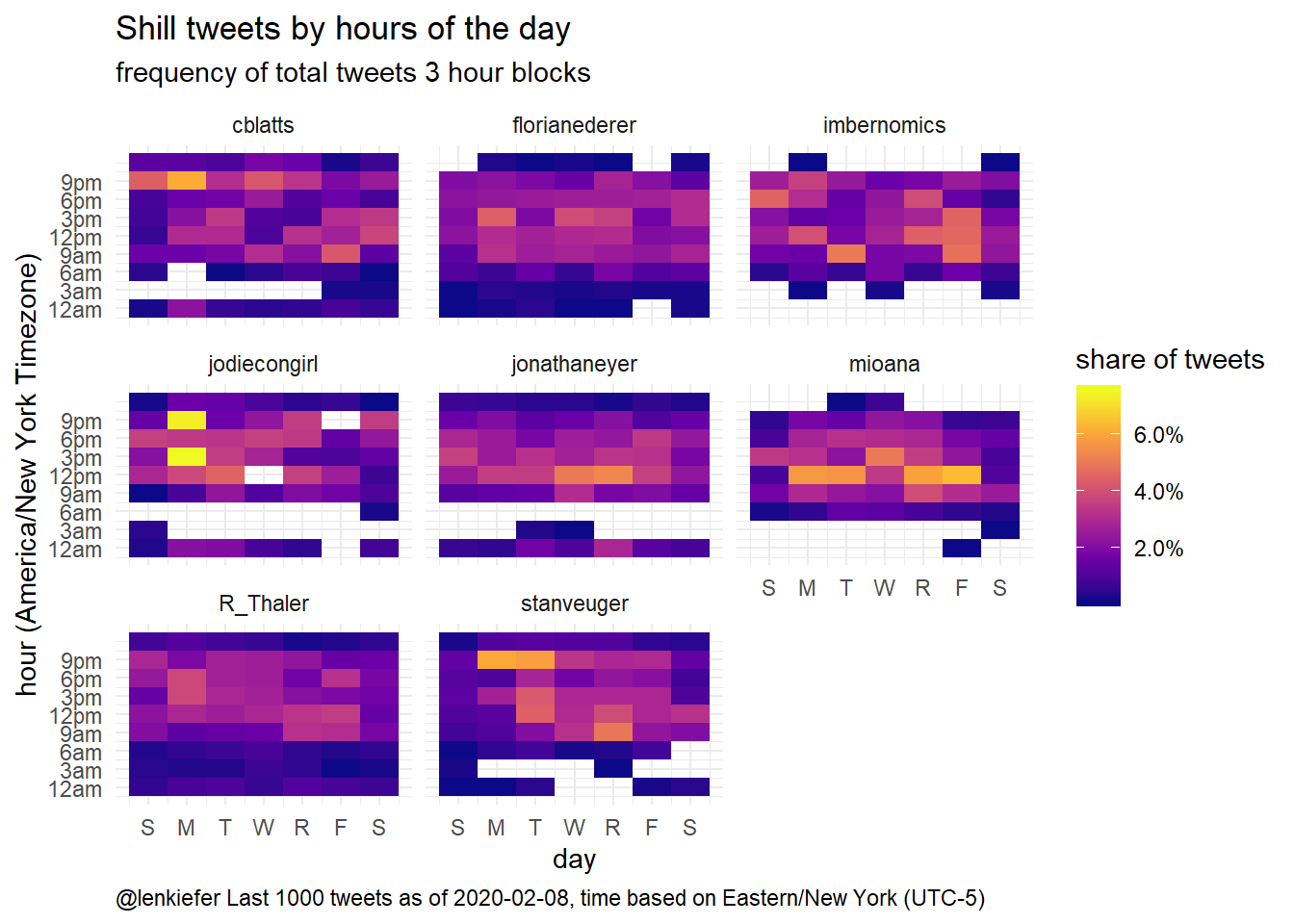 The table below matches you to your shill based on weekend/weekday and time: (before 10am), business hours (10am-5pm), or evening (after 5pm). If you are a morning person @florianederer just might be your shill. But if you prefer the night (I have kids so after 5 == night for me) then either @stanveuger or @jodieecongirl give you the most intense tweets. If you shill 9-5 on the weekdays then @mioana fits best. If you are chaotic business (business hours but weekend) then perhaps @imbernomics should be your shill. 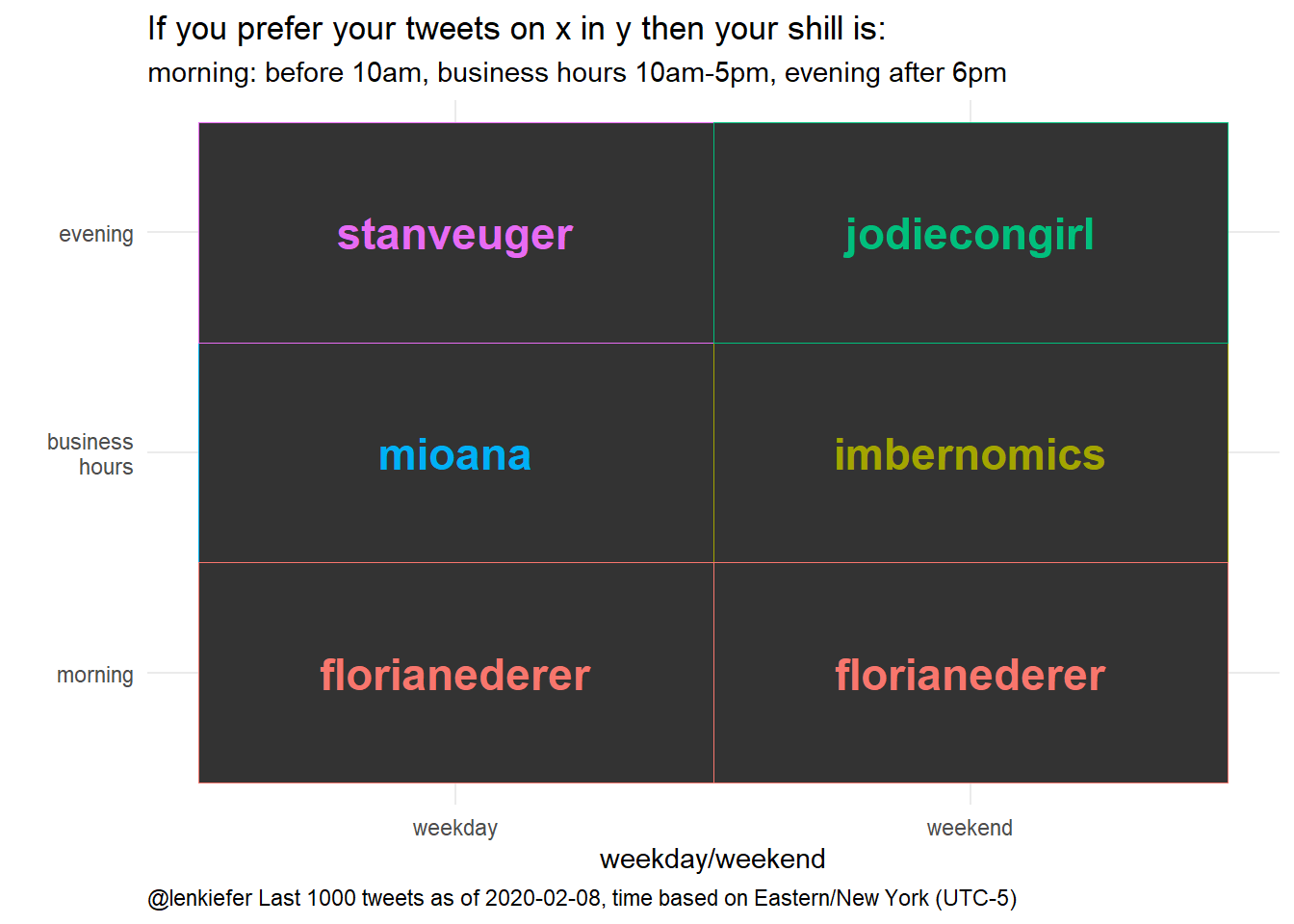 What they shill about

Perhaps it is quality of tweets that matters most. Quality is subjective, but we can use text mining tools to examine what topics our shills are shilling on about. The chart below shows the tf-idf statistic: term frequency and inverse document frequency for each prospective shill. The tf-idf statistic will decrease the weight on very common words and increase the weight on words that only appear in a few tweets. In essence, we extract what’s special about each prospective shill’s tweets. 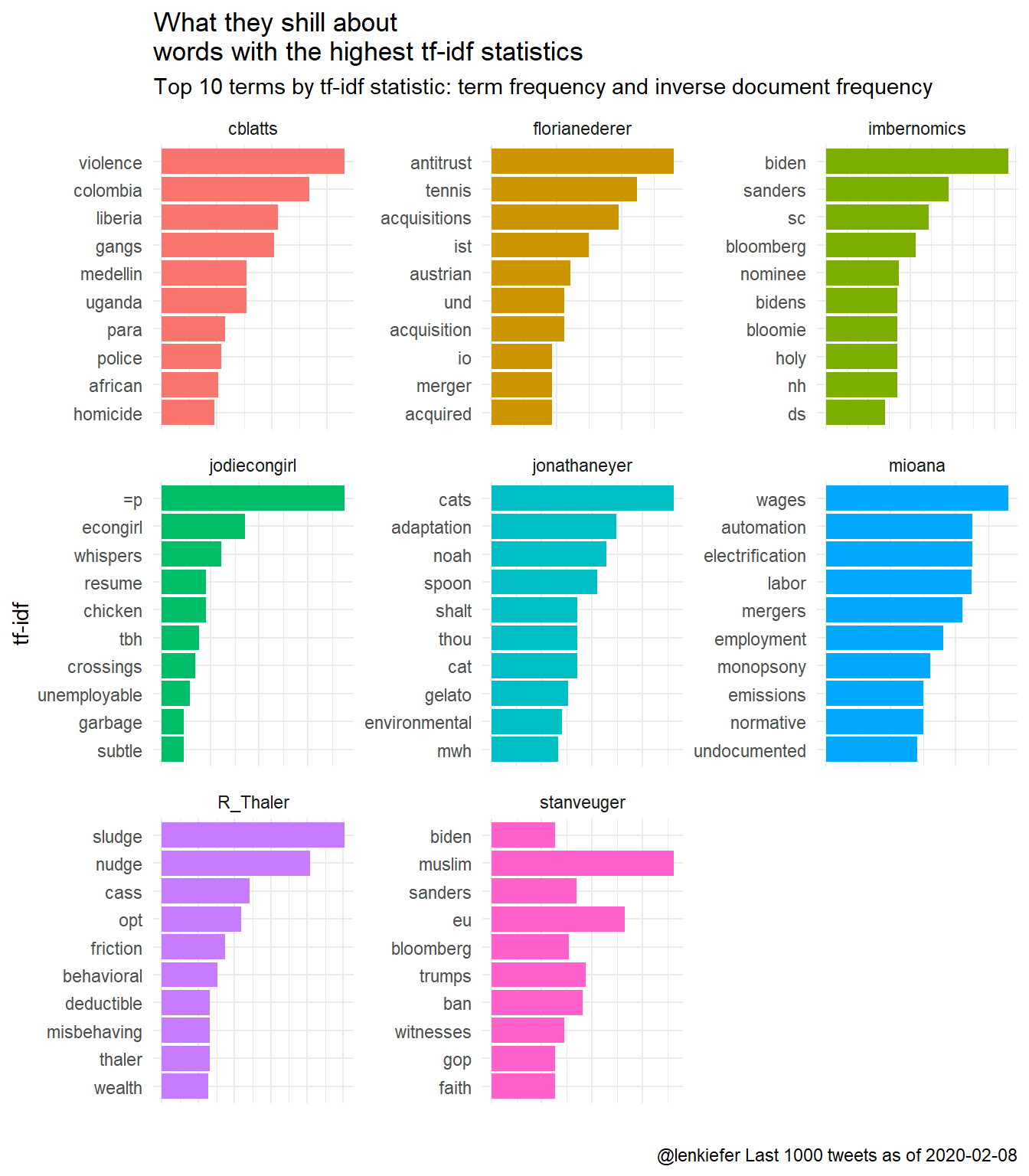 As you might suspect there is a good deal of politics, but also some quite idiosyncratic terms show up.

There’s quite a few graphics, so I’ve hidden them in the tab. Click to expand.

How do you feel about hashtags?

If you like hashtags the table below shows the hashtags with the highest tf-idf (term frequency inverse document frequency) for each shill. 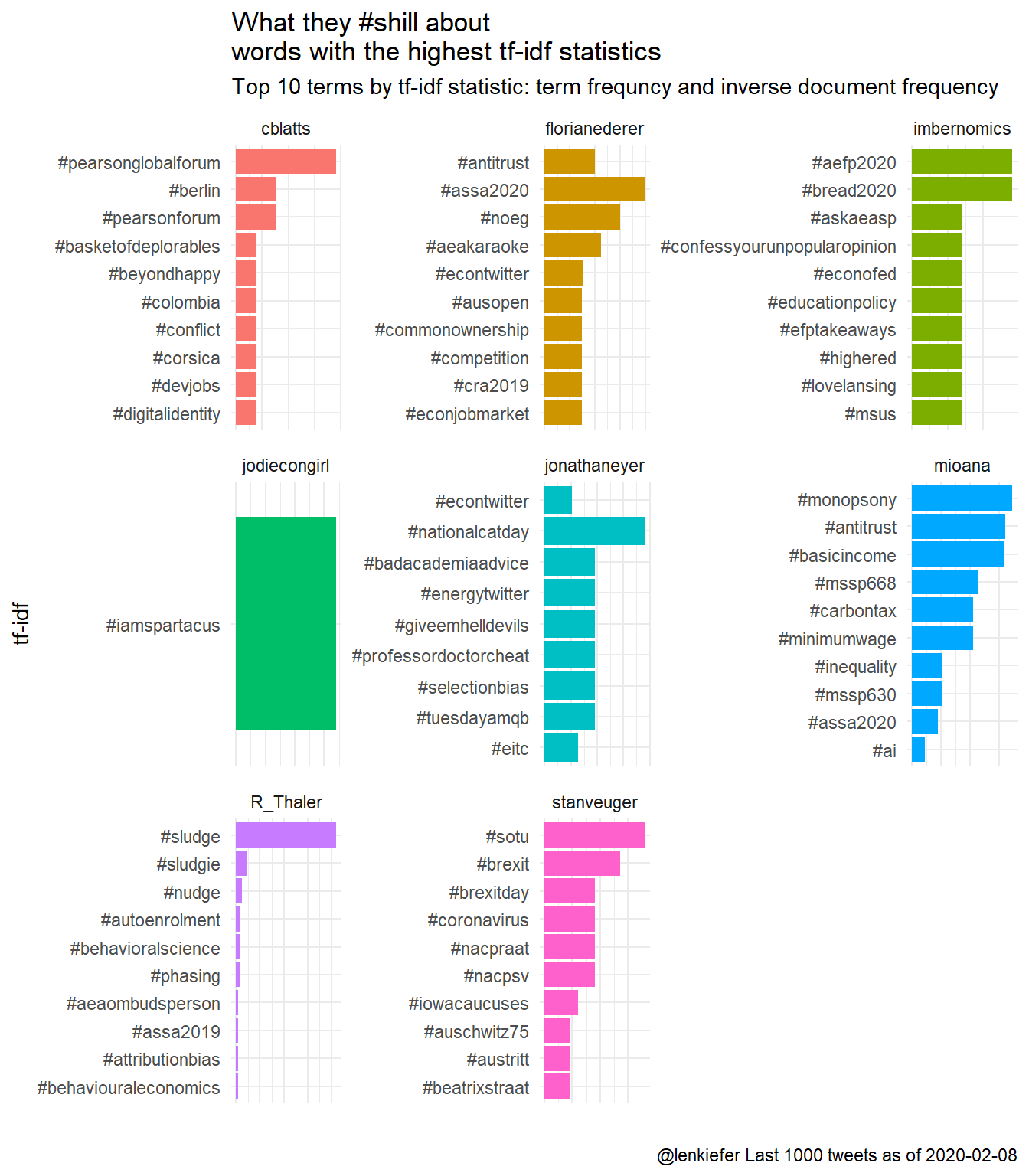 Perhaps when deciding the best shill, we need to consider who is closest to the ne0liberal account in terms of tweets. We can compute a cosine similiarity metric ( see http://text2vec.org/similarity.html#cosine_similarity and https://www.brodrigues.co/blog/2019-06-04-cosine_sim/ ) to compare how similar the tweets are among our shills.

To give some comparison I also pulled in tweets from the @ne0liberal account, my own account @lenkiefer and @Wikipedia and @weatherchannel. Finally I also included tweets from @dril.

Warning! @dril is not a family-friendly twitter account. When I computed the tf-idf statistic for @dril relative to our prospective shill all the top terms were either profanities, scatological, body parts, or combinations of all three.

The matrix below displays the cosine similarity measure for our prospective shills and the comparison groups. The diagonal are by definition equal to 1. Everyone is perfectly similar to themselves. The darker orange the square, the more similar the two tweet timelines. The shills cblatts and jonathaneyer have the strongest relationship.

The charts below contain the same information as the graphic above, but might be easier to read.

which shill is most ne0liberal?

First, who is the most @ne0liberal? The shills @stanveuger and @imbernomics are the most similar. The @weatherchannel and @dril (reassuringly) are the least similar. 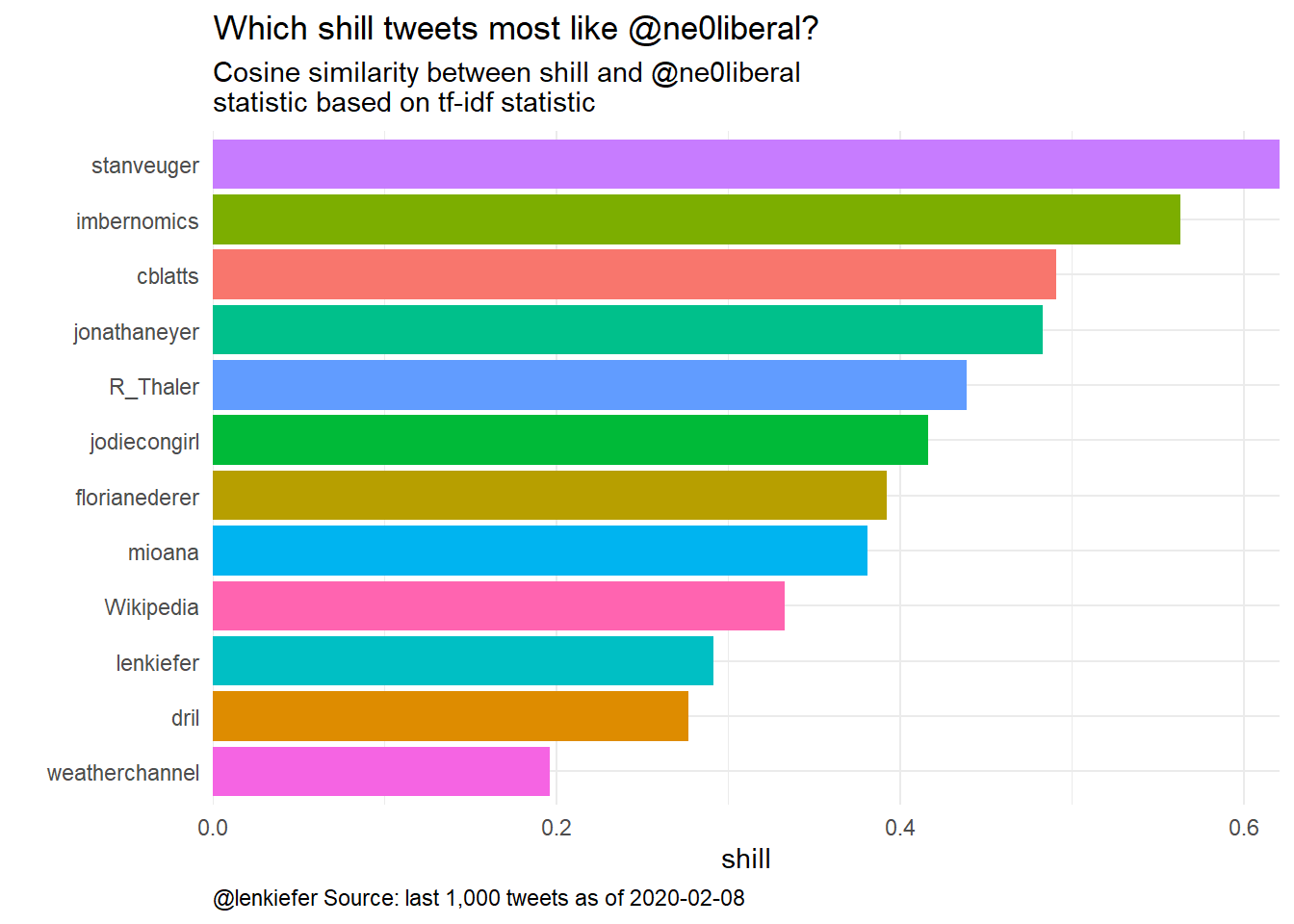 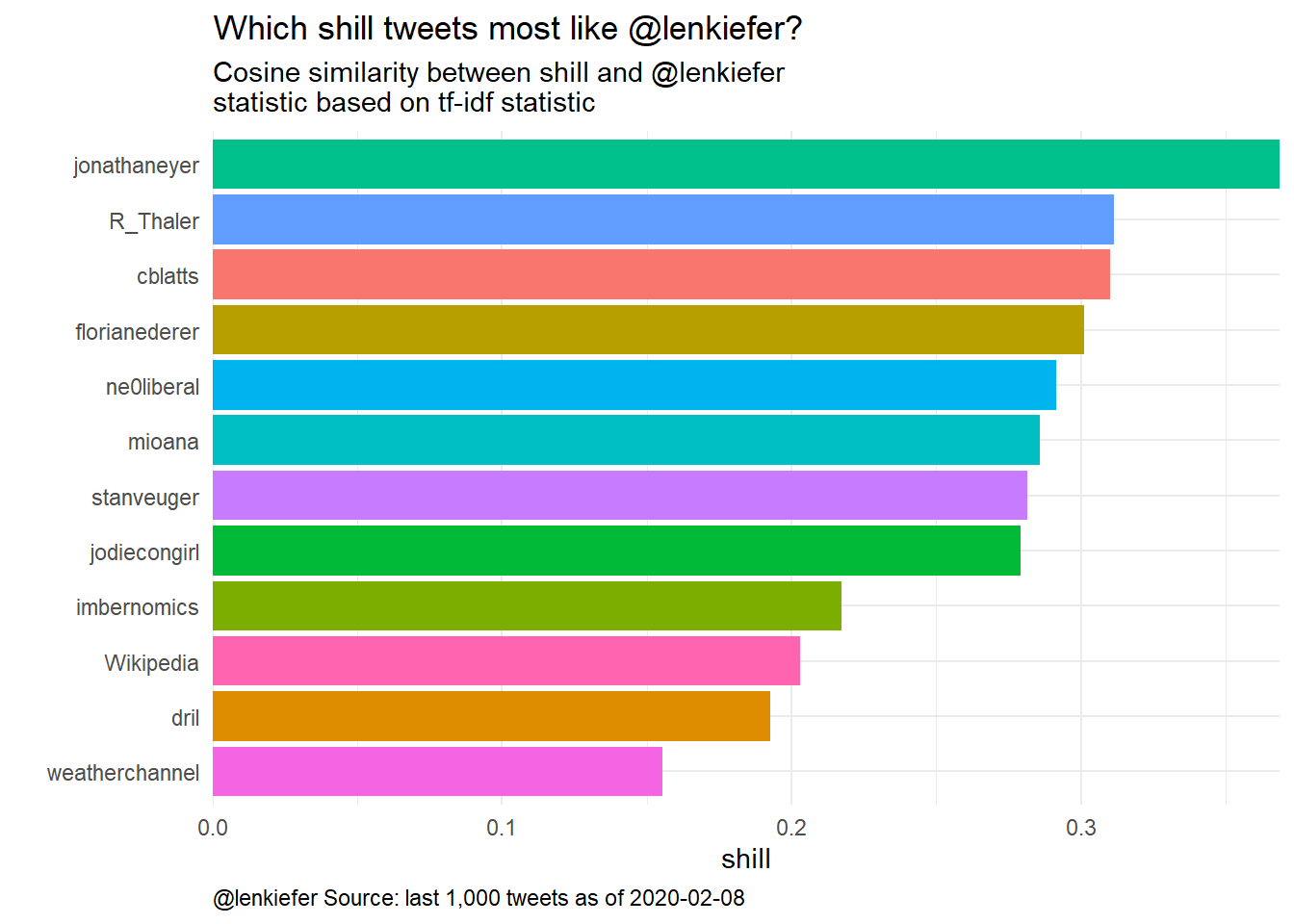 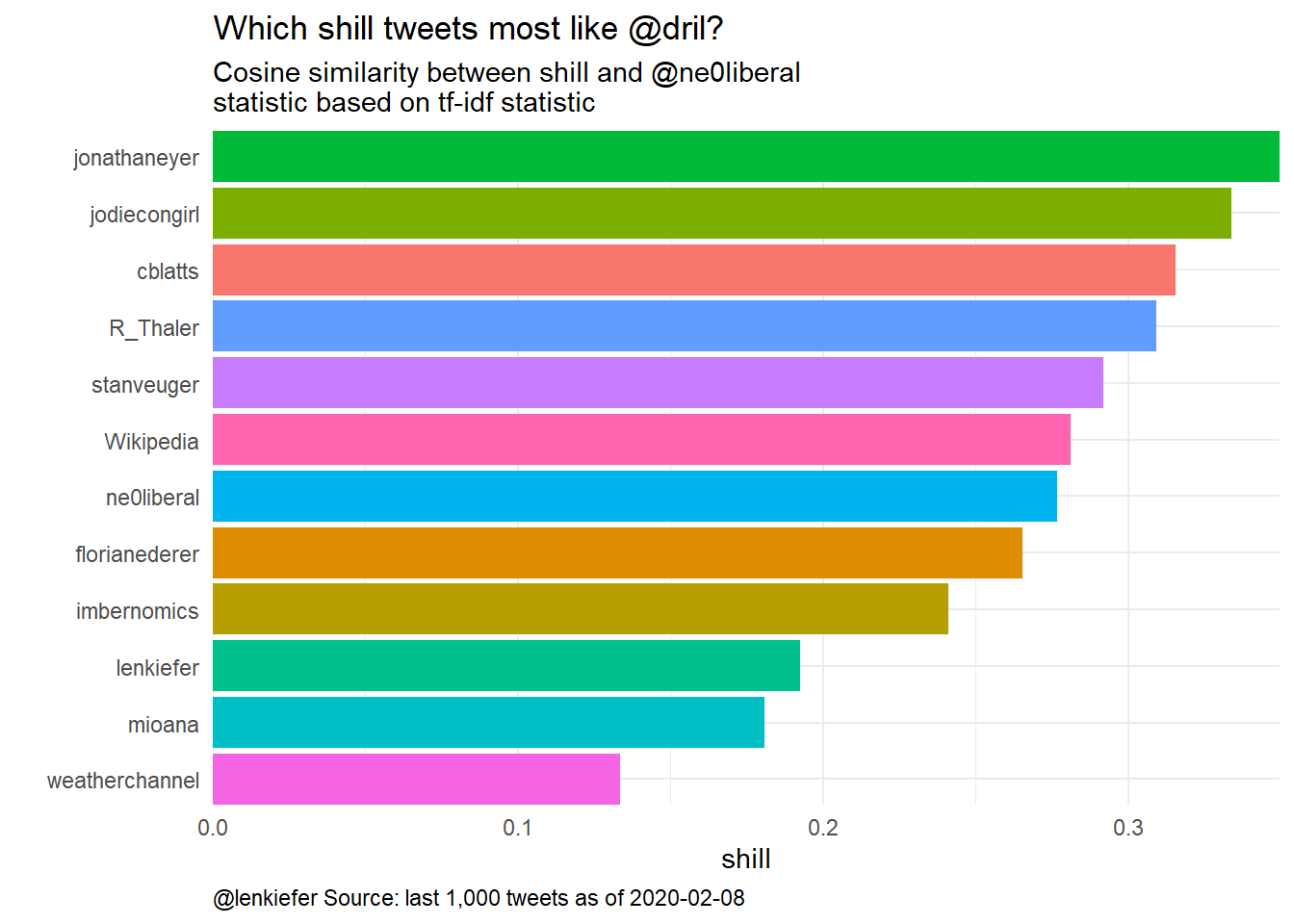 At the moment only @R_Thaler has a he Sveriges Riksbank Prize in Economic Sciences in Memory of Alfred Nobel.

Do they have great taste?

I’ve presented a variety of statistics and analytics around the various candidate shills. For me there is statistic that I will rely on for my vote. Only @jodiecongirl has demonstated the good judgement and excellent taste required to follow @lenkiefer.

All the analysis, charting, and this blog post were made with R. I may post code at a future date. Most of it follows the steps laid out in my earlier post Beige-ian Statistics.